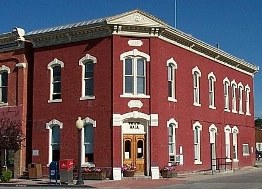 A little bit about Town Hall....

Constructed in 1883, this building was initially the Bank of Buena Vista. The strip of land was conveyed to the Buena Vista Land Company in 1881 after the town had already been platted. The bank was built on the northeast portion of the strip. The Halsey Block was built next to the bank using the rest of the strip and adjoining lots in 1885. A two-foot "alley" divides the two structures and is occupied by a stairway with access to the upper floors of both buildings.

The two-story Italianate structure is basically rectangular with a corner front entry. It is 27' 10" wide and 65' 5" inches long. It is built of locally manufactured painted brick and uses carved stone strip for its window sills, lintels, and pediment above the bracketed metal cornice. The carved stonework is adorned with a grapevine motif. Stone plaques advertise the original use, "Bank" and the date, "1883."

The First National Bank of Buena Vista continued operating in the building until 1935. During that time various businesses, including R.H. Howard's dentist office in 1902 and the public telephone and switchboard in 1906, leased office space upstairs and in the back rooms. The bank was liquidated in 1935 due to the Crash of 1929 and the ensuing Depression. The First National Bank of Buena Vista was one of only two banks in the U.S. which fully paid off all depositors before closing.

The Building was sold to the Town of Buena Vista on July 15, 1935 and used for a time as a welfare center for distributing food and clothing during the worst of the Depression. Soon after the sale a check-cashing facility operated by the Commercial Bank of Leadville occupied the main front room while town offices, the police department, and the fire department operated in the remaining portions of the building.

This arrangement continued until 1966 when the check-cashing facility ceased to operate and the police and fire departments moved to the newly constructed public safety complex. Since 1966 the building has been fully occupied by the town's administrative offices on the lower floor with occasional leasing of the second floor to private businesses.

At present the entire building is occupied by town offices.